Anti-Poverty Week supports the Australian community to have an increased understanding of poverty and to take action collectively to end it. This year Anti-Poverty Week will run from 16-22 October and the focus will be on halving of child poverty by 2030.

We are seeking your support to promote Anti-Poverty Week within your organisation and networks by HOSTING AN EVENT.

By working together to raise awareness and take action on the issue of child poverty, we can make sure all Australian children and families can meet their basic needs.

Check out some IDEAS FOR ACTIVITIES for ways to get involved.  Don’t forget to TELL US ABOUT YOUR ACTIVITY so we can add this to our calendar of events.

The WA Committee for Anti-Poverty Week 2022 is made up of the following organisations:

Anti-Poverty Week will celebrate our 20th anniversary and be held from the 16th to the 22nd of October 2022.  In 2021 we called on governments to take action on 2 key things to unlock poverty for individuals, families, and children: raise income support above the poverty line and invest in social housing.  We supported the Raise the Rate for Good and Everybody’s Home campaigns.  See our 2021 page for more. 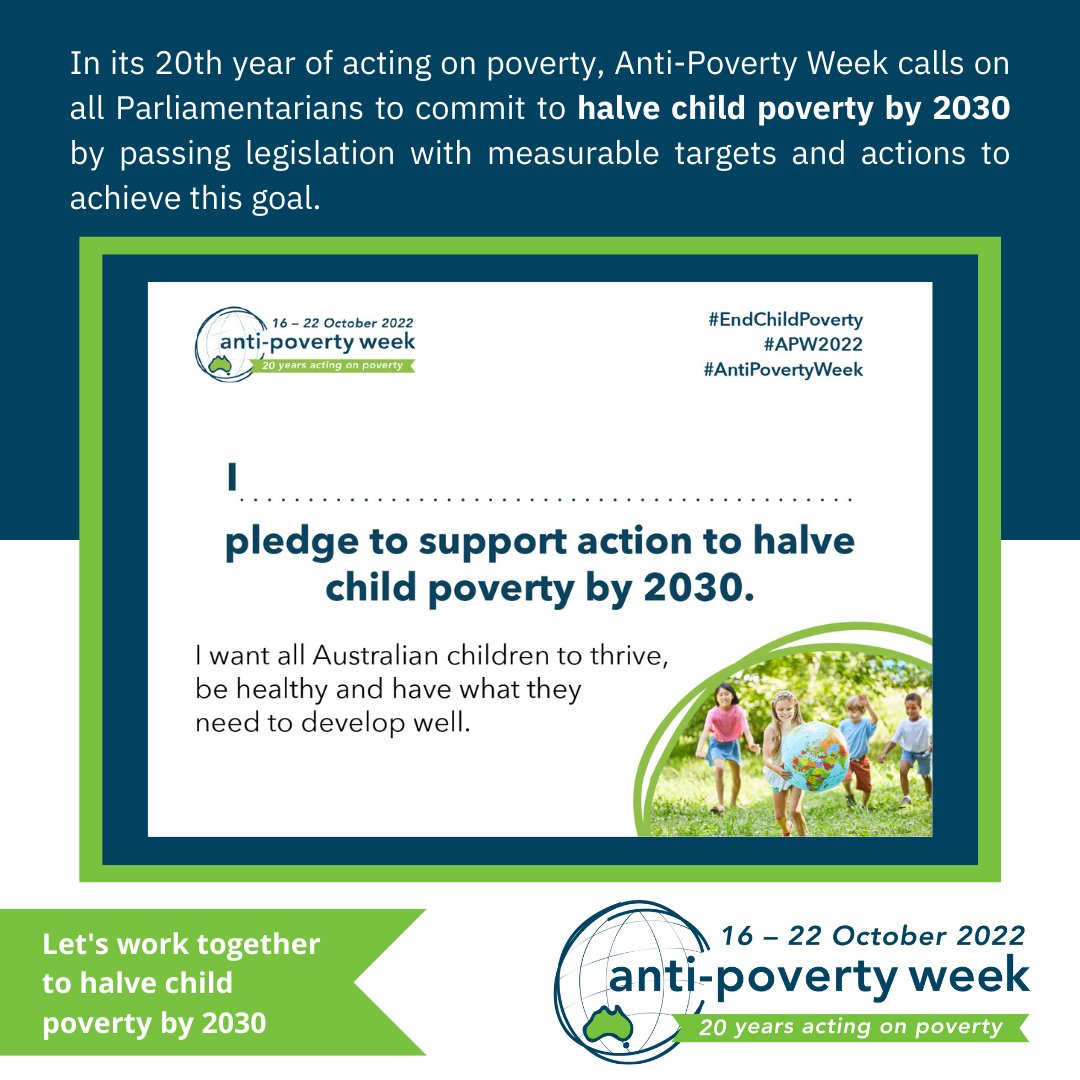 In our 20th year of acting on poverty, Anti-Poverty Week calls on all Parliamentarians to commit to halve child poverty by 2030 by passing legislation with measurable targets and actions to achieve this goal. We invite all Australians to join in and SIGN THE PLEDGE TO HALVE CHILD POVERTY BY 2030.

Download the Pledge and print, sign it with a thick texter, take a photo and post to social media with #EndChildPoverty #AntiPovertyWeek #APW22 (and encourage your CEO/ED to do so too).
Action to reduce child poverty includes: raising all income support payments to at least the level of the age pension, increasing Commonwealth Rent Assistance by at least 50%, building more social housing, restoring single parents to the Single Parent Payment until their youngest child turns 16, reviewing Family Payments and Child Support.

Our Fast Facts series provides a snapshot into the realities of poverty in Australia and around the world that aim to help you educate and inform your community.

According to the report, released this week, nearly 11.8 percent of the population are living on less than half of Australia’s median income.

Monique Earsman, executive director, Catholic Social Services Australia, said that as shocking as the report is, the findings for women are even worse.

“The report reveals a clear gender gap in poverty in Australia, with young women and women approaching retirement much worse off,” Ms Earsman said.

According to the report, one in five people in poverty in Australia are in low-paid employment. One in eight agriculture workers and 10 percent of workers in the accommodation and food services sector have earnings that come in below the poverty line.

“High rents have increased poverty levels among renters, with the poorest families in Australia scraping by on less than $150 per week after housing costs.

Other key findings in the report include:

The Valuing Children Initiative’s aim is to inspire.

A society that is built on valuing children is a society that benefits all. Through research, education, and advocacy, the Valuing Children Initiative promotes the understanding that child wellbeing is essential to building a stronger society and is the shared responsibility of the whole community.

This awareness drives a cultural change where it becomes automatic to prioritise children’s needs, across all facets of society, to create an environment in which our future generation can thrive and reach their potential.

We aim to inspire

All children are valuable, and every childhood is precious.

Join us in creating a society in which all Australian children have the supports and opportunities they need to flourish.

Every Child is Valuable – new campaign

“Government policies directly affect children and young people and it is essential that their voices and needs are represented at all levels of government.”